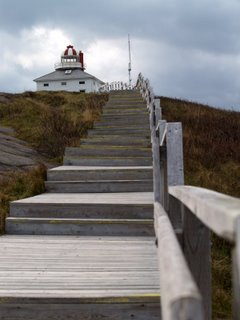 The oldest surviving lighthouse in Newfoundland and Labrador is located at the most easterly point of land in Canada. It has been restored to its 1839 appearance and shows how a lightkeeper and his family might have lived in the mid-19th century. The Visitor Centre contains exhibits on the history of lighthouses and the tradition of lightkeeping. The site is surrounded by spectacular scenery and wildlife such as whales, seabirds and icebergs in season.

My previous post shows the current in service lighthouse built to replace this one in 1955.